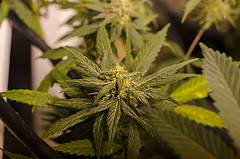 Marijuana is becoming legal elsewhere but is still very illegal in Utah.

As is normally the case in Utah, while the world around us is changing and evolving Utah stays the same, and that is definitely the case when it comes to marijuana use. Colorado and Washington have already fully legalized marijuana and California has a very liberal medical marijuana program. While marijuana remains very much illegal federally the feds have stated that they aren’t going to get involved at this time with the legal use of marijuana in Colorado and Washington. What does all of this mean for Utah? Nothing really. Marijuana is still very illegal in Utah, whether you’re transporting it, using it, possessing it, or even using it for medical purposes. Additionally, while a bill was proposed for a medical marijuana program it was not passed and there is still no legal use of marijuana in Utah whether its used for recreational or medical purposes.

Potential Penalties for Marijuana Possession or Use in Utah

In most marijuana cases in Utah the offender is being charged with possession or use of less than one ounce of marijuana. That charge is a class B misdemeanor and carries a maximum penalty of up to 6 months in jail and a fine of $1,000 plus fines and surcharges. If the offender has no prior drug or criminal charges then often a defense attorney can get prosecutors to agree to a plea in abeyance agreement that keeps a conviction of the offenders record, however there are still a lot of hoops the individual has to jump through. While this simple possession of marijuana is often considered a somewhat light charge marijuana charges can be enhanced and can become very serious very quickly. If it is determined that the marijuana that was possessed was possessed with the intention of distributing it then the charge quickly becomes a felony. Additionally, the only thing a prosecutor needs to charge distribution are items that suggest distribution such as little baggies, a scale, or sometimes simply the amount of weed possessed is considered an indicator that it was for distribution and not personal use.

At Salt Lake City Criminal Defense we understand the realities of our current society and we understand how to protect our client’s rights. If you have been charged with a marijuana crime then call us today because we will fight tirelessly for you to make sure your rights are protected and make sure you are informed as to your options. Call or email us today for a free consultation.