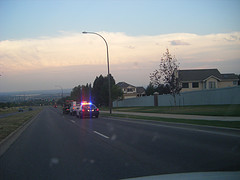 A police officer can stop a vehicle for any traffic violation, no matter how minor.

In State v. Stewart, decided just a week ago, the Utah Court of Appeals addressed a case that gives a good example of what police, sheriffs deputies, and highway patrol troopers do everyday throughout the state.

In December of 2008, Shannon Stewart was pulled over because her taillights were not working. The most common reason vehicles get pulled over is for a minor traffic violation like the one committed by Ms. Stewart. Speeding, malfunctioning lights, and other equipment violations give cops the legal authority to make a vehicle stop.

The police officer approached Ms. Stewart’s vehicle and noticed she was “jittery”. As he spoke to her she slurred her words and her eyes did not respond to light very well. Ms. Stewart told the police officer that she was upset because Adult Probation and Parole had been to her house (her husband was on probation) and she did not like what they were doing. The police officer called AP&P and confirmed that they had been at Ms. Stewart’s home. He also discovered that AP&P found a box with syringes with meth residue on them.

The police officer then returned to Ms. Stewart and asked her to roll up her sleeves so he could check her for needle marks, which he did find. He then placed her in the back of his patrol vehicle. The cop gave her Miranda rights and she said she may want an attorney. The officer then said he would not question her if she wanted an attorney, which she denied and said she would cooperate. In her discussions with the officer she admitted that the syringes were hers and that she had been using.

She underwent a blood test which returned negative for any illegal drugs, but positive for some prescription drugs for which she had a prescription. Ultimately she was convicted of possession of drugs and drug paraphernalia.

On appeal Ms. Stewart challenged the vehicle stop and the admissions she made to the officer about her drug use. The court reiterated the standard for determining whether a vehicle stop is reasonable under the Fourth Amendment. First, “whether the police officer’s action was justified at its inception”. Second, “whether the detention following the stop was reasonably related in scope to the circumstances that justified the interference in the first place.” During a lawful traffic stop, the temporary seizure of driver and passengers ordinarily continues, and remains reasonable, for the duration of the stop. And if, during the scope of the traffic stop, the officer forms new reasonable articulable suspicion of criminal activity, the officer may also expediently investigate his new suspicion.” Reasonable suspicion is “suspicion based on specific, articulable facts drawn from the totality of the circumstances facing the officer at the time of the stop.”

The court of appeals found that Ms. Stewart’s acting “jittery” and having constricted pupils was sufficient to allow the officer to administer tests to determine her sobriety and therefore she could not have shown that a motion to suppress would have been granted.

The court also denied that Ms. Stewart would have won a motion to suppress the statements she made to the police because her request for an attorney was ambiguous, and therefore, the officer rightfully asked additional questions to clarify her request. He verified her request and she said she would cooperate so there was no violation of her rights.