Home » Blog » When is a K-9 Search During a Traffic Stop Unconstitutional?

When is a K-9 Search During a Traffic Stop Unconstitutional?

What Are the Rules for a K-9 Search of a Vehicle?

Dogs can be trained to detect narcotics at very small amounts. Most law enforcement agencies have K-9 units set up for this very purpose. Typically what will happen is a law enforcement officer will pull over a car who he believes committed some pretextual traffic violation and then that officer will have a K-9 unit on standby, nearby. He will tell the K-9 officer to come to the stop and conduct a K-9 search, even though for legal purposes dog sniffs are not actually considered a search. The dog will give an “indication” that narcotics are in the vehicle and then that gives the officers the probable cause needed to conduct a search. 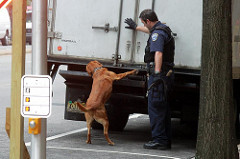 A K-9 search of a vehicle can take place as long as it does not prolong the original reason for the stop.

In State v. Baker, 229 P.3d 650 (Utah 2010)  the Utah Supreme Court addressed the basic laws that surround a K-9 search. In United States v. Place, the U.S. Supreme Court found that a K-9 search or dog sniff of a vehicle is not a “search” for purposes of the Fourth Amendment. In the subsequent case Illinois v. Cabales, however, the high court found that based on the premise that a dog sniff is not a search, a drug-trained dog may walk the perimeter of a lawfully detained vehicle even if police have no reasonable suspicion that the vehicle occupants are engaged in drug-related activity so long as the dog sniff search does not extend the duration of the stop. So, if an officer prolongs the stop beyond its purpose in order to allow the K-9 search, the seizure that follows may be the subject of suppression.

In the Baker case the defendant in that case had been stopped because of a broken tail light. It was discovered he was also driving on a suspended license. The officer immediately placed the defendant under arrest for driving on a suspended license. He then called in a K-9 unit who did a perimeter search of the car and indicated for narcotics, which were then found in the vehicle. The Utah Supreme Court found that the purpose of the stop was completed upon the arrest and the subsequent K-9 search was therefore illegal.

When is a K-9 Search During a Traffic Stop Unconstitutional? was last modified: January 25th, 2017 by Jerry Salcido
Posted in Vehicle Stop